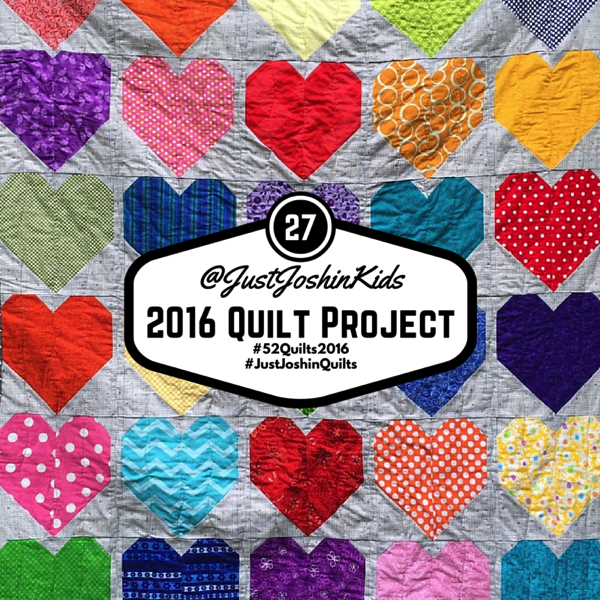 Like most people, I heard the news from Orlando and felt heartbroken and helpless. When something popped up in my Instagram feed about the Quilts for Pulse Donation Project the Orlando Modern Quilt Guild was organizing, I went through my scraps and started cutting. I had enough rainbow scraps to do 30 hearts without any repeating fabrics. I used a neutral grey, low volume fabric for the background. And backed it in a darker grey.

The suggested pattern is a Heart Block from Cluck Cluck Sew. It took longer than I predicted to put it together, I wanted to have it in the mail before July 1st, but it’s done now and as soon as it has a label, it will be in the mail to a new home. It’s not much but hopefully it will bring some happiness to someone who needs it. Thank you to the Orlando Modern Quilt Guild for organizing and facilitating this quilt drive. Knowing the online quilting community, I think they will get more than enough quilts to spread the love all over Orlando. 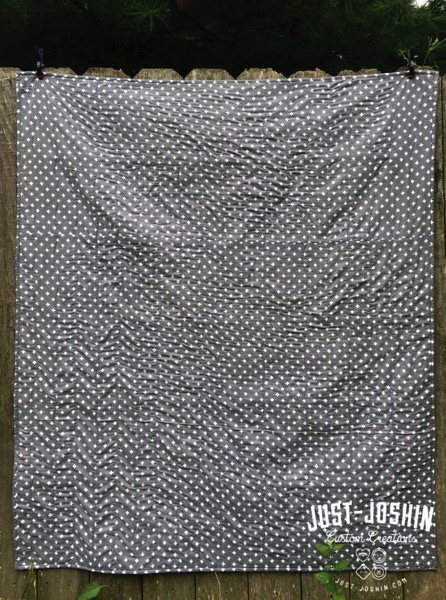 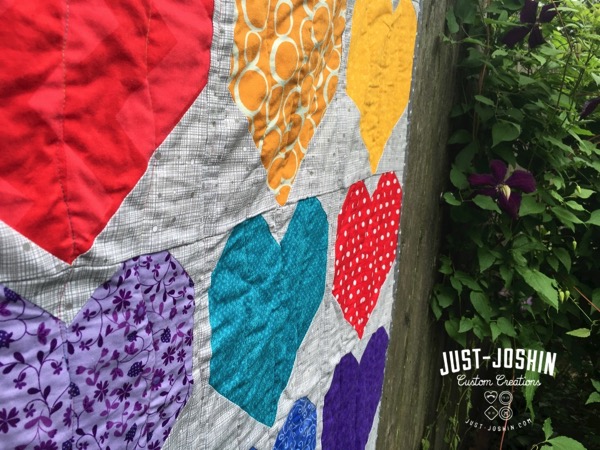 The most recent swap I participated in was a short turn around but it was really fun. The theme was “Double Mini” meaning it was a mini quilt that also had miniature dimensions. It couldn’t be larger than 8” on a side. I used a charm pack of Tula Pink fabric and this free Prismatic Medallion pattern (reduced to 50%)

The hexagonal binding was a new challenge but I think the grey stripes is a fun addition.

I didn’t quite get it right the first time, it was too small. But I finished it (and another) anyway, since I had it already cut out. I gave one to a friend and the second is hanging in my sewing room on my Mini Wall.

There were enough scraps leftover to make a couple little pouches so I included one of those and some rainbow thread when I sent the package.

I am such a delinquent blogger. I made this little mini Team Ironman quilt a couple months ago for my 2016 Birthday Fun Swap. The birthday girl of the month was a huge Marvel fan, especially Ironman. I made this mini quilt with a free pattern from Quiet Play. 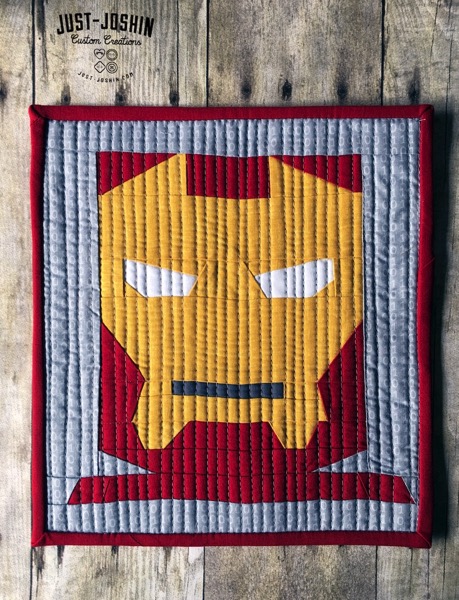 For the rest of the package, I included a Sew-Together bag by Sew Demented, which I did in Marvel theme.

I included some fun extras, including a tumbler I decorated with vinyl and my Silhouette Cameo, a couple decals and some Ant Man and Iron Man goodies. 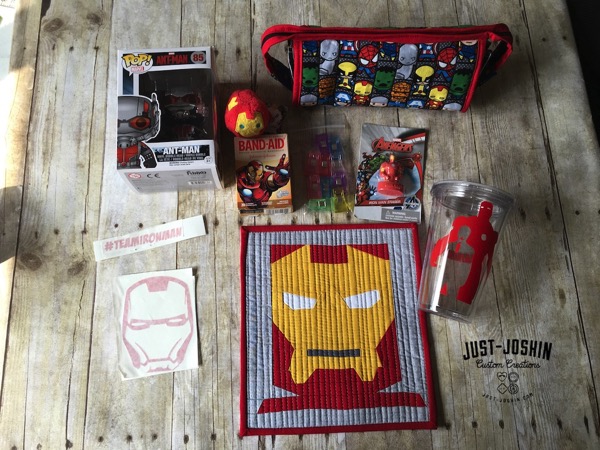 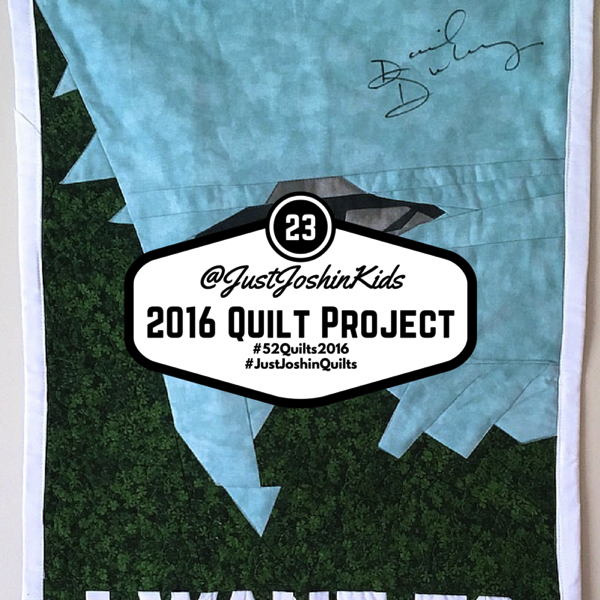 This mini quilt was made specifically to have autographed when I went to Comic Con. You can read all about this mini quilt and the awesome weekend in Philadelphia here.

I finished up the binding on this Denver Broncos quilt today, it’ll be in the mail tomorrow to my nephew. Last week was his 9th birthday and I had hoped it would be done in time but it’s just a tad late. He’s a Broncos super fan, so I know he will love it, even if it’s belated.

I sent the quilt out for long-arm quilting, which has a fun football motif. I kept the patchwork simple and used tonal fabrics to accent the logo fabric. The back is a different Broncos fabric as well.

I also did a paper-pieced pillow to match. I hope he loves it. Even if it is a little past his birthday. 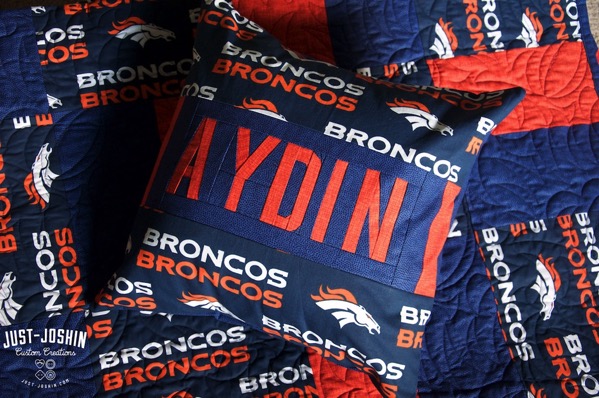 The #maythe4thMQS swap I hosted has gone pretty smoothly. For the most part, people have all shipped on time, checked in and the quilts they’ve made are nothing short of amazing.

I had one swapper contact me and let me know she had a family emergency and she was concerned she wouldn’t be able to ship on time. I told her not to worry, family always comes first. And I stepped in and made this little Droid-inspired mini quilt in her place.

I used the Quiet Play patterns for the droids and added the text with my embroidery machine. How cute are R2 and C3PO? 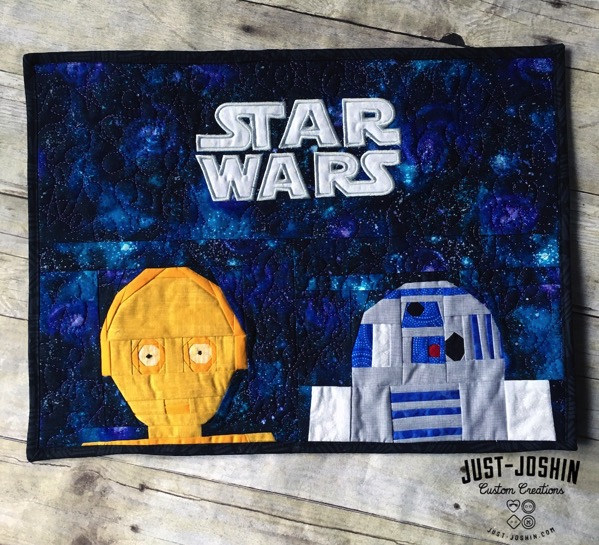 I had a little fun practicing with my free-motion quilting and in addition to swirls, I added stars, which was something new.

May the Force be with you!

When Fandom in Stitches announced the X-Files Quilt Along to correspond with the X-Files Revival in January, it rekindled my long-dormant X-Files obsession. I had watched all the original X-Files episodes in college, but hadn’t watched in a long, long time. In preparation for the revival episodes, I started binging on the originals on Netflix, starting with the Pilot. I remembered why I loved this show, it’s just so great. (And despite the gigantic cell phones, it has aged well.) The characters are amazing, it’s funny and touching and dramatic, sometimes all at once.  Of course, I ended up watching while I was sewing, all the way through start to finish, then started over again at the pilot, as any insane person would.

I finished the quilt top and sent it out to have it quilted, I am so glad I did. I couldn’t have done this kind of work on my home sewing machine, and I love the honeycomb pattern. (Because Bees!) 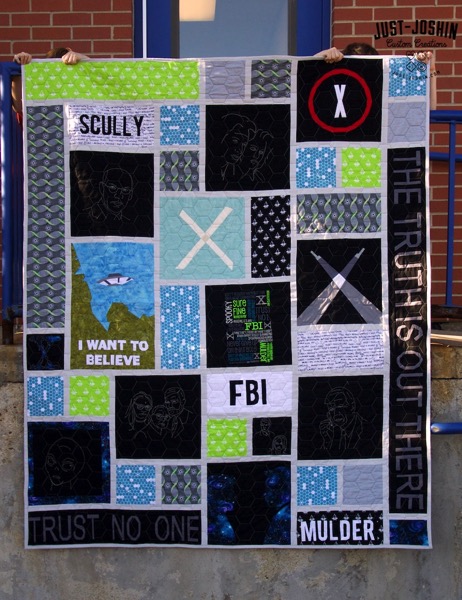 I cannot even put into words how much fun I had with this quilt. I started with the Fandom in stitches patterns, which were a mix of paper piecing and embroidery. (Though I admit to not being thrilled about hand-embroidery, so I did it manually on my sewing machine.) The embroidered blocks include Mulder and Scully, Skinner, Cigarette Smoking Man, a Grey Alien, The Lone Gunmen, and a tiny Doggett and Reyes. The major paper piecing patterns from the original are the large text blocks “Trust No One” and “The Truth is Out There.”

When I started looking for fabrics, I happened upon a couple fabrics that just seemed perfect. I found a great combination of aliens and science, just like the X-Files. I added in the hexagon fabric (and later the hexagonal quilting) as a nod to the bees storyline. Throughout the quilt there is UFO, DNA, scientific equations and honeycombs, all in the black/grey/lime/teal scheme. 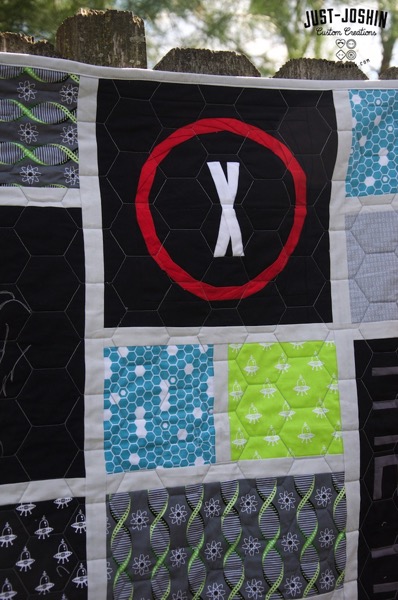 After the initial quilt along, people submitted additional patterns, so I added a couple to my quilt, including the X logo from the credits, and the taped X from Mulder’s window.

I used the Alphabet From Blank Pages on Craftsy (affiliate link) to do a block for each Mulder and Scully. His with UFO fabric and hers with Scientific Equations.

I also improvised some blocks of my own. I used my Silhouette Cameo to cut the profiles of Mulder and Scully for this spacey block. 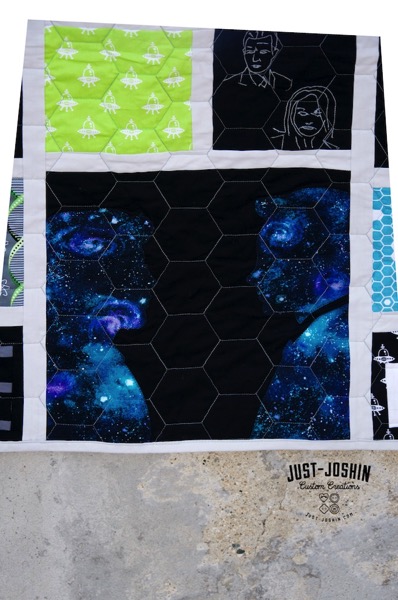 And I put together this subway art embroidery design with favorite quotes from the show. And another alphabet block with FBI. 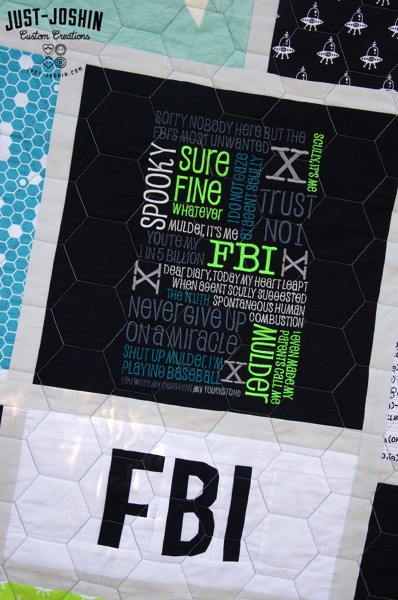 I even tried my hand at making a paper piecing pattern of my own  with these flashlights making an iconic X. (Which turned out OK, but was certainly not perfect and my pattern making skills need work!)

The main paper piecing block was this large replica of the “I want to Believe” poster than hangs in Mulder’s basement office. I want to make this into a mini quilt for my wall.

The backing fabric is this adorable UFO fabric which I love.

I love all the little details in this quilt, and I love even more I love that it’s something I made just for me! It’s nice size to curl up on the couch and binge watch Netflix. X-files, of course.

A few months ago I decided to organize a mini quilt swap of my own. It was a Star Wars themed quilt swap, with the shipping dates just before the Star Wars holiday, May the 4th (be with you!) You can see all the incredible mini Quilts on Instagram with the hashtag #maythe4thMQS (Seriously, how amazing are some of these quilts!)

I had 3 volunteers who helped me organize, so we were each placed on another team so we could participate in a blind swap. Then something crazy happened. One of my very favorite quilt pattern designers, Kristy from Quiet Play, signed up for my swap. I am a super Quiet Play fangirl so I was beyond excited. Then she started making all sorts of Star Wars inspired paper piece patterns for the swap, which was even cooler. Then something EVEN crazier happened, I got my partner assignment and guess who I was assigned to make a mini quilt for? Yep, Kristy. So. Intimidating. Plus, all those crazy cool patterns were totally not an option…

She requested a mini quilt for her son’t Star Wars room, so I decided to do Applique the main characters from The Force Awakens, Rey, BB-8, Poe and Finn.

Personally, I think BB-8 is pretty much the cutest thing ever. I adore him. Rey, Finn and Poe are such great new characters, I thin they made a great quilt. 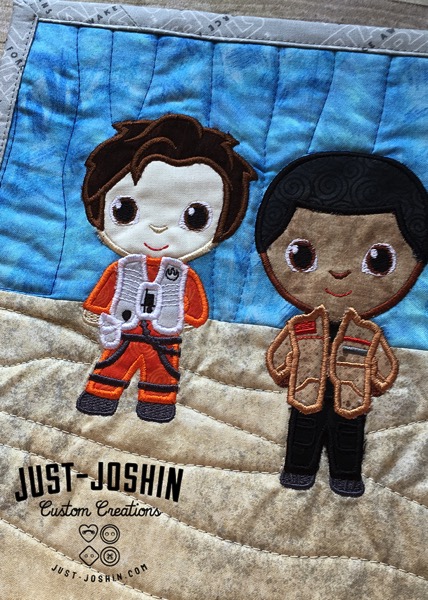 I did some wavy line quilting to make the sand look more like sand, and added some lines in the sky. I haven’t really used appliqués for creating a scene in a mini before but I can see myself doing it again, I mean how cute did they turn out?

The backing I just did some basic Star Wars fabric, and bound it with some Force Awakens text fabric.

I did a special label, also with the embroidery machine, which was something new for me too. 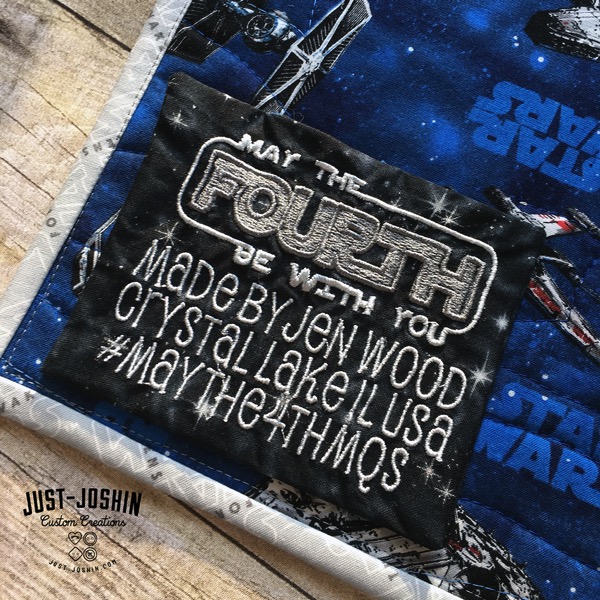 Before I sent the package off to Australia for May the 4th, I decided I should include something just for Kristy (since the packages was largely for her kiddos.) so I used her mini Death Star pattern and did a fun little rainbow twist and put it together as a zip pouch.

Since the package needed to ship to Australia, I tried to find fun, lightweight extras for her kids, so I ended up sending Legos, stickers, tattoos, pencils and a couple small toys. It arrived on May the 4th, so the timing was perfect, and most importantly, Kristy loved it! (Whew, since I was totally sweating making something for someone who’s work I admire so much!)

May the 4th Be with you! 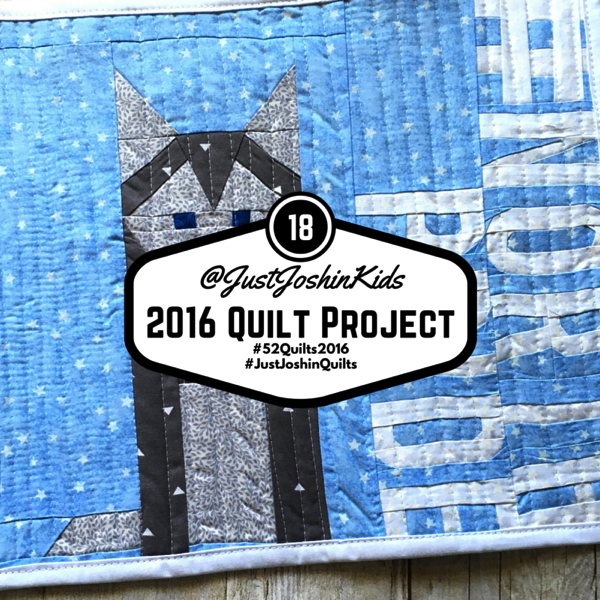 I made this cute little Husky quilt as a donation for my sons’ school fundraising auction. Their mascot is the North Star Huskies, and the school uses the #northpride hashtag on all their Twitter activity. I found the pattern from ProtoQuilt on Craftsy. I used the From Blank Pages Alphabet, also from Craftsy, (affiliate links) 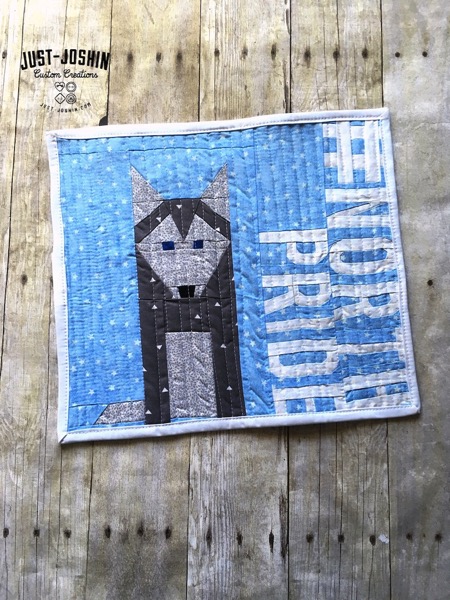 I did a simple polkadot background and even used my labels (which I never remember to do!)

Hopefully this little guy will raise some money for the boys’ school. 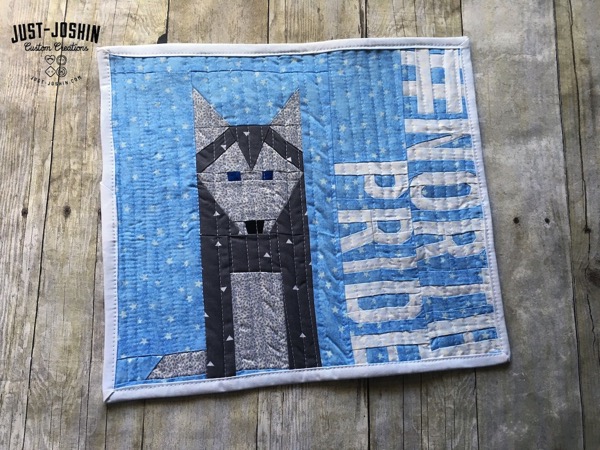 These adorable triplets from Brave were the last-minute project for my new Disney Mini Quilt swap partner after my partner dropped a few days before the ship date.

I went through my new partner’s Instagram posts and Pinterest boards, and she had said she loved Brave. I found this pattern on misha29.com and did it in triplicate. As a mom of twins, I have become accustomed to doing everything twice, so three wasn’t too bad. There were so many pieces in their eyes, they took forever! But totally worth it! I mean, how cute are these guys? 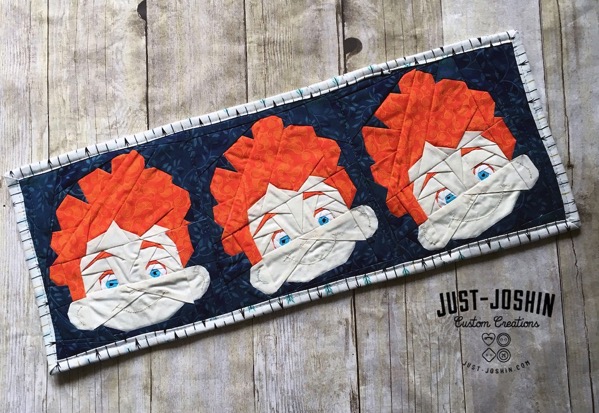 Their noses and mouths were stitched on afterward. 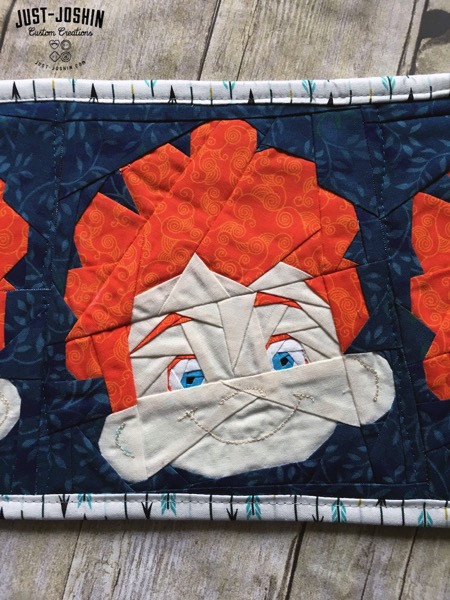 I used this arrow fabric for the backing and border to round out the theme. My partner loved it. I am glad I did something just for her based on her preferences and it turned out exactly like I had hoped.

My eBook is Available Now!

May contain Affiliate Links, which means I may receive monetary compensation if you make a purchase using this link.**